A little bit ABOUT ME

Dominique Clare is a sportswriter, blogger, fitness coach, and the founder of Sports and Fitness Digest. 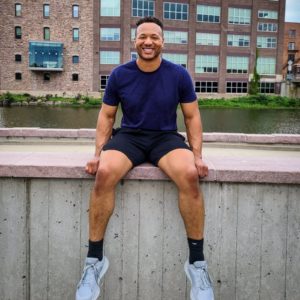 Dominique’s writing career started in the early 2010s after graduating from SD State and playing Division 1 college football as a running back and kick returner. He created an independent blog and wrote about everything from technology to sports.

A few years later, Dominique received an opportunity to contribute to Huff Post to write about technology and social issues. Several of his articles were featured in front of their national audience. After getting that taste, he fell in love with being a content creator and never looked back.

In 2017, Dominique started covering the Minnesota Vikings and Timberwolves for Midwest Communications Inc 80+ Radio Network and Fansided. His work with those outlets was featured on Fox Sports, Sports Illustrated, and Bleacher Report numerous times. Midwest Communications brought him on board as the national Content Director where he directed all blogs, news, podcasts, and social media for their national radio network.

With professional goals falling into place, Dominique realized that his health and fitness fell behind. He started his fitness journey in hopes to inspire other former athletes that may be struggling. He shared his fitness journey through blogging and social media. That journey lead him to partner with amazing companies like BPI Sports & Fabletics.

​In 2020, Dominique lost his position with Midwest Communications due to COVID-19 business-related complications. He used that as an opportunity to launch a website called Sports and Fitness Digest™ that combined two of his biggest passions.

Personally, he is married with three children. He was born in the Bahamas and grew up in Minnesota. This website serves as his hub for all his work.